Elias is a small web services firm. Everyday we face questions about constraints. It’s tempting to find client projects that will keep the lights on and then avoid taking risks; or sometimes we get so obsessed with discovering perfectly fulfilling work to the detriment of cash-flow. What client projects should you take on? How much time should you spend on your own products? Which product ideas have the most merit? And these are just the HOW and WHAT questions to a business. WHY you do these things is even more significant.

What Ed Catmull, president of Pixar, had to say about competing constraints:

If I look at the range, you’ve got one [constraint] that is art school – I’m doing this for arts sake. Ratatouille and WALL-E clearly fall more on that side. The other is the purely commercial side where you’ve got a lot of films that are made purely for following a trend. If you go entirely for the art side then eventually you fail economically. If you go purely commercially then I think you fail from a soul point of view. We’ve got these elements pulling on both sides, the art side and the commercial side, and the the trick is not to let one side win. To get the different blogs related to artist and art then click here.

Fundamentally successful companies are unstable. And where we have to operate is in that unstable place. The forces of conservatism, which are very strong, they want to go to a safe place – I want to go to the same place for money, I want to go and be wild and creative or I want to have enough time for this. Each one of those guys are pulling and if any one of them wins, we lose. I just want to stay right there in the middle.

I feel the pull that Ed describes. It’s a battle of priorities.

Ed’s perspective gives me comfort in our situation. He admits that he doesn’t always know what the right answer is. He goes as far as to say that “successful companies are unstable.” That certainly appears to have been the case at Pixar, especially in the early days.

Steve Jobs purchased Pixar from Lucasfilm in 1986 for $5 million and then put another $5 million into it. But by 1990 Pixar was running a net operating loss of $8.3 million with its hardware and software products. 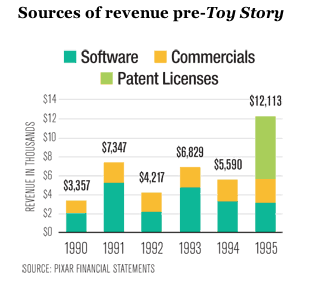 It wasn’t until Pixar inked a deal with Disney in 1991 that the future maker of animated videos would uncover a new business model filled with beloved Buzz Lightyear, Nemo, Cars, and 9 hit movies. Pixar’s first film, Toy Story, debuted in November 1995 and raked in $382 million worldwide. Now Pixar is preparing for Toy Story 3 and being praised for its creative culture.

Elias has been in business for over two years now. We don’t have it all figured out. We’re learning everyday and working hard to add value to our clients’ businesses. And we will continue to invest in our team, embrace the tension of competing restraints, and build the culture of creativity & transparency which I believe will lead us to infinity and beyond.